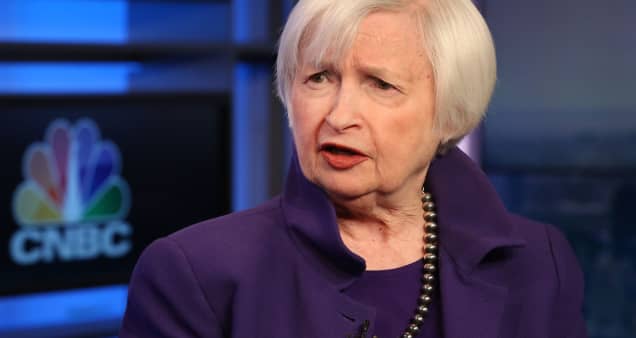 Stock futures were flat in overnight trading on Thursday after Treasury Secretary Janet Yellen said a large Covid relief package is still needed for a full recovery in the U.S.

“We think it’s very important to have a big package [that] addresses the pain this has caused – 15 million Americans behind on their rent, 24 million adults and 12 million children who don’t have enough to eat, small businesses failing,” Yellen was quoted as saying.

She added a $1.9 trillion stimulus deal could help the U.S. get back to full employment in a year.

Walmart slumped after reporting weaker results than analysts were expecting.

Many on Wall Street believe that in order for the market to extend its march higher, expectations for further fiscal stimulus and a smooth reopening need to become reality.

Meanwhile, short selling was under the microscope on Thursday as a U.S. House committee grilled executives from trading app Robinhood and hedge funds Melvin Capital and Citadel over the GameStop Corp trading frenzy, with some calling for change. Shorting a stock is a bet that the share price will fall.

GameStop had around 140% short interest at its peak in January, meaning more shares were shorted than the company had outstanding.

“The ability for the same share to be shorted an indefinite number of times is somewhat of a pathology and that should be fixed,” said Robinhood Chief Executive Officer Vlad Tenev.

He called for a modernization of the market’s infrastructure so shares can properly be tracked once they’ve been loaned out to be shorted, which does not currently happen.

Melvin had been short GameStop since 2014. It suffered massive losses as retail investors piled into GameStop in January, driving its price up 1,400% and creating a “short-squeeze,” where short-sellers were forced to buy the shares back at a higher price to close their positions, adding to the upward pressure on the stock price.

Citadel made a $2 billion investment in Melvin on Jan. 25, which closed its GameStop position on Jan. 27.

People familiar with the fund said it lost almost 30% in the first three weeks of January. The stock of GameStop was languishing at $40 as the markets closed.

Michel Dell invests $500 M in SPAC, Wall St. cautious for the week ahead