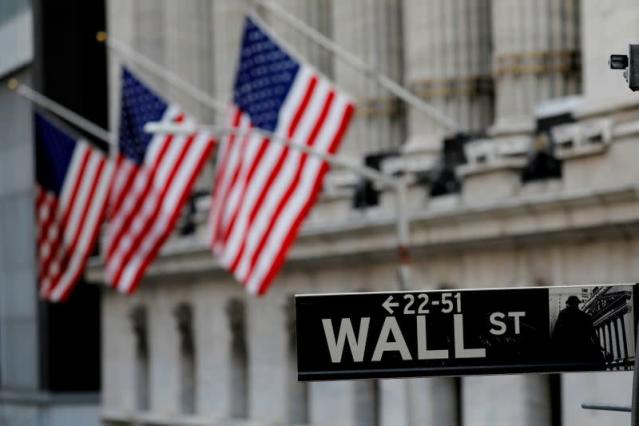 US stocks fell Monday with the Nasdaq tumbling 2% amid fears of rising inflation, with technology stocks under more pressure as gas futures hit their highest level since 2018 on Monday after a cyberattack against a key fuel pipeline over the weekend.

The Dow erased earlier gains to end lower after the index set an intraday record of more than 35,000 during the session.

Treasury yields were slightly higher across the long end of the curve, with the benchmark 10-year yield hovering below 1.6%. West Texas Intermediate crude oil prices and gasoline futures gained after the Colonial Pipeline; a top U.S. fuel pipeline operator temporarily had cut off its fuel lines after a cyberattack.

Virgin Galactic stock fell more than 4% during extended trading after the space company reported a first-quarter loss of 55 cents per share. Golf equipment and apparel company Callaway Golf popped more than 5% during extended trading after it reported first-quarter profit and sales that soared past expectations as did Wynn Resorts which advanced 2% despite reporting results that fell short of market expectations.

Elsewhere, Ether, the token built on the Ethereum blockchain, set an all-time high of more than $4,000 before paring advances, giving back some gains after a rally that doubled prices for the second-largest cryptocurrency since the beginning of April. Bitcoin prices fell, dipping below $56,000.

Musk made headlines when Tesla purchased USD 1.5 billion in Bitcoin back in February. Since then, many of his statements, mostly tweets, have sent the prices of crypto into a frenzy, especially Dogecoin which prior to SNL hit an all-time high of USD .70.

Many investors were hoping for the meme-based currency to eventually reach USD 1. However, after Musk jokingly stated over a segment that Dogecoin was “a hustle”, its price fell 36% to roughly USD .41 hours after the show. Musk also announced his SpaceX company will launch the satellite “DOGE-1 Mission to the Moon” next year.

On the COVID front, The WHO has granted emergency use authorization for a Covid-19 vaccine made by, China’s state-owned drugmakers, Sinopharm (OTCMKTS: SHTDY). The vaccine is one of the two coronavirus shots used in China and the first manufactured non-Western country to receive approval by WHO.

Meanwhile, the rate of average daily new Covid cases in the U.S. fell to below 41,000 over the weekend, down 30% from two weeks ago and the lowest level since September.

CDC data shows that the country is averaging 2 million vaccinations per day over the past week.