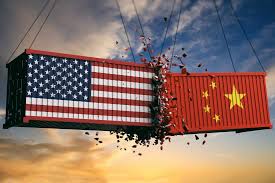 The Trump administration on Monday published a list of Chinese and Russian companies with alleged military ties that restrict them from buying a wide range of U.S. goods and technology.

The list will restrict the sale of US goods and technology to the firms by requiring US exporters to obtain a license.

The final list names 103 entities. Fifty-eight are designated under China, down from 89, and 45 entities are tied to Russia, up from 28.

The final list does not include Commercial Aircraft Corporation of China (COMAC), or the Hong Kong subsidiaries of Colorado’s Arrow Electronics ARW.N and Texas-based TTI Inc, a Berkshire Hathaway BRKa.N electronics distributor. Those companies were reported to be initially on the draft list.

Commerce Secretary Wilbur Ross said on Monday the action establishes a new process “to assist exporters in screening their customers for military end-users.”

The final list was published on the Commerce Department website on Monday and is scheduled to be posted for public inspection in the Federal Register on Tuesday.

Publishing the list in the waning days of the Trump administration follows the addition of dozens of Chinese companies to another U.S. trade blacklist, including the country’s top chipmaker, SMIC 0981.HK, and Chinese drone manufacturer SZ DJI Technology Co Ltd, on Friday.

This act is likely to inflame Beijing. Chinese Foreign Ministry spokesman Zhao Lijian in November called news of the draft list “unprovoked suppression of Chinese companies by the United States.”

While COMAC was removed, seven Aviation Industry Corporation of China (AVIC) subordinate entities remain on the list. General Electric Co GE.N and Honeywell International HON.N both have joint ventures with AVIC and supply COMAC, which is spearheading Chinese efforts to compete with Boeing Co BA.N and Airbus AIR.PA.

Earlier this month, Arrow and TTI both denied their subsidiaries have ties to the Chinese military and said they were working to be removed from any final list.

The Trump administration is enacting a series of hardline policies against Beijing in its final days. Some believe the actions are intended to box in the incoming Biden administration. If Joe Biden reverses the moves, he would appear soft on China.

Mixed Tuesday for stocks: Cruise and Travel stocks still in the red