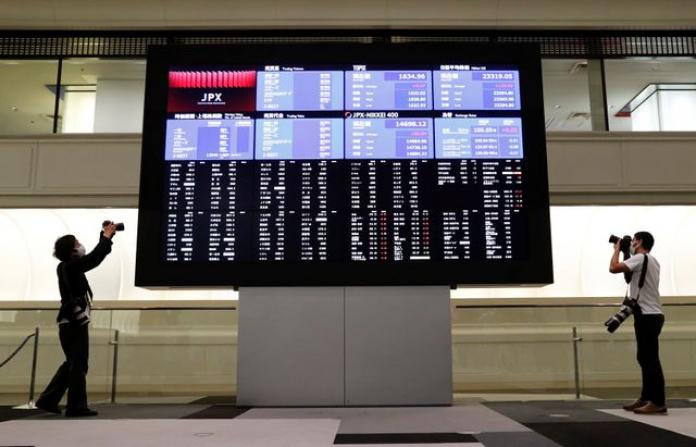 Wall Street’s main indexes closed lower on Monday as investors took some profits as the news trickled of the democrats formally introducing a resolution to impeach President Trump, charging him with “incitement of insurrection” for his role in last week’s  U.S. Capitol attacks.

They had unsuccessfully tried to earlier impeach him in Feb 2020 on charges of abuse of power and obstruction of Congress.

U.S. stocks were buoyant last week as investors bet that Democrats’ win of Georgia runoff elections would bring a higher likelihood of a heftier fiscal stimulus package to boost the COVID hit economy.

The FBI has warned of possible armed protests being planned for Washington, D.C., and at all 50 U.S. state capital cities in the run-up to President-elect Joe Biden’s inauguration on Jan. 20, a federal law enforcement source said on Monday.

The U.S. Treasury yields rose as safe-haven bonds sold off on Monday and economically-sensitive sectors such as energy and financials outperformed while defensive bond proxy sectors like utilities and real estate sold off.

Among the S&P’s 11 major industry indexes, consumer discretionary.SPLRCD and communications services.SPLRCL were the biggest percentage decliners.

Declining issues outnumbered advancing ones on the NYSE by a 1.53-to-1 ratio; on Nasdaq, a 1.17-to-1 ratio favored decliners.

On U.S. exchanges 14.08 billion shares changed hands on Monday compared with the 11.87 billion average for the last 20 sessions.

Shares of Twitter Inc TWTR.N tumbled 6.4% and weighed on the communications sector after the permanent suspension of Trump’s account. Other Big Tech firms Facebook Inc FB.O, Alphabet Inc-owned Google GOOGL.O, and Apple Inc AAPL.O were also weak on Monday as they took their strongest actions yet against Trump to limit his social media outbursts.

Boeing Co BA.N shares fell 1.5% on Monday after a 737-500 jet operated by Indonesia’s Sriwijaya Air with 62 people on board crashed on Saturday.

Shares in Eli Lilly and Co LLY.N rose 11.7%, making it the biggest single boost for the S&P 500 after a small trial of its experimental Alzheimer’s drug found that it slowed by about a third the rate of decline in a combined measure of cognition and function in patients at an early stage of the disease.

4 Renewable Energy Stocks to watch for in 2021: An Investor Telegraph Exclusive