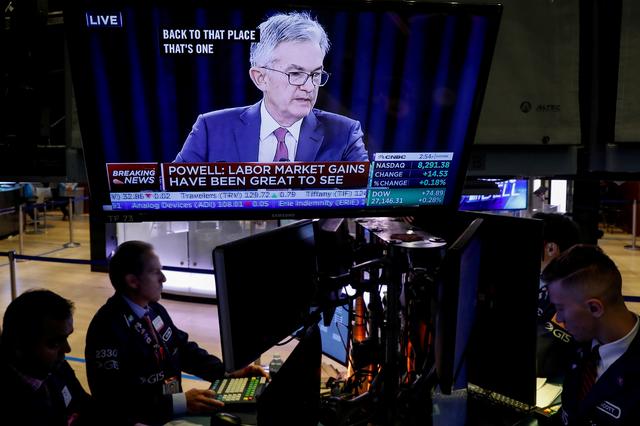 Powell assured of near-certainty that interest rates won’t be going anywhere but failed to impress market overnight sentiment as  Dow futures lost 35 points, while contracts tied to the S&P 500 and Nasdaq 100 were down 0.2% and 0.3%, respectively.

The tepid movement in the futures market on Sunday followed yet another record close for the Dow Jones Industrial Average on Friday when it gained nearly 300 points to end at 33,800.6. The S&P 500 had gained 0.8% and hit its third straight record close.

The first-quarter earnings report season begins this week with expectations set for broadly positive news and an uptrend for U.S. equities thanks to a recovering economy. Many of the nation’s largest banks, including Goldman Sachs and JPMorgan Chase, will this week report results for the three months ended March 31.

On Sunday, Powel said in an interview, “I think it’s highly unlikely that we would raise rates anything like this year.”

“I’m in a position to guarantee that the Fed will do everything we can to support the economy for as long as it takes to complete the recovery,” he further added. Powell has also been supportive of aggressive federal spending programs implemented under both Trump and President Joe Biden to stem the worst impacts of the public health crisis.

Congress will return to Washington this week and be in session for the first time since Biden debuted his proposal, which earmarks hundreds of billions of dollars for roads, bridges, airports, broadband, electric vehicles, housing, and job training.

Meanwhile, on the COVID front, states will see a sharp decline in deliveries of the one-shot Johnson & Johnson vaccine this week as the company struggles to meet its manufacturing timeline.

The federal government is planning to deliver fewer than 800,000 doses this week, down from the 5 million that had been planned.

California said it expects to see a 90% decrease in the supply of that vaccine. The company has failed to win federal certification for a contract manufacturer in Baltimore after 15 million doses of J&J’s vaccine were ruined at the plant last month.

Double-shot vaccines from Moderna and Pfizer continue to flow, and White House pandemic advisers say they hope J&J’s issues could be resolved by month’s end.