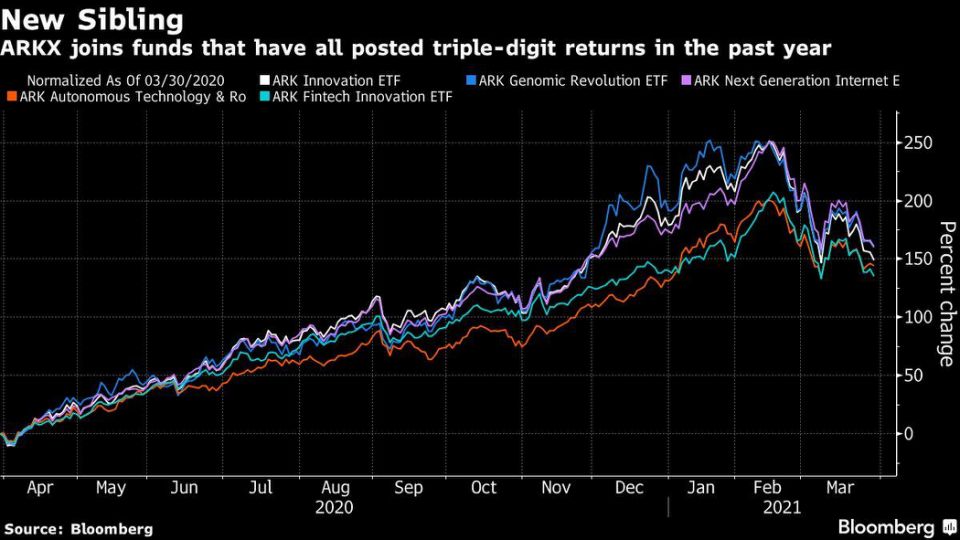 The U.S. stock market saw some volatility in the final hour of trading on Tuesday but ended well off session lows. Small caps and growth stocks outperformed.

The Dow Jones Industrial Average lost more than 100 points, falling from a record high reached on Monday. The S&P 500 fell about 0.3%.

The Nasdaq Composite dipped about 0.1% as Facebook, Amazon, Apple, Netflix, and Microsoft declined.

The Russell 2000 index jumped 1.7%, helping reduce Monday’s 2.8% tumble. The major indexes closed in the upper half of the day’s price ranges. The Nasdaq composite trimmed a 1% early loss to just 0.1% at the closing bell.

Amongst the movers were heavy-industry companies such as Granite Construction (GVA), Sterling Construction (STRL), and Nucor (NUE). The stock market is expecting positive news for these companies when President Biden announces an infrastructure program on  Wednesday.

At the outset, the space fund’s top two holdings are Trimble Inc. and another Ark fund called the 3D Printing ETF (PRNT) with weights of 8.6% and 6%, respectively.

Other large stakes include Kratos Defense & Security Solutions Inc., L3Harris Technologies Inc., and JD.com Inc., an online retailer in China. The fund aims to invest at least 80% of its assets in the space industry.

Ark Invest, which targets disruptive companies particularly ones in technology, has picked up a lot of attention for its other funds’ strong during the Covid-19 pandemic.

However, that momentum has eased this year as many investors have sold high-growth stocks from the past year in favor of companies whose businesses are expected to boom during an economic recovery.

Yellen lays out aggressive agenda for transparency in financial system