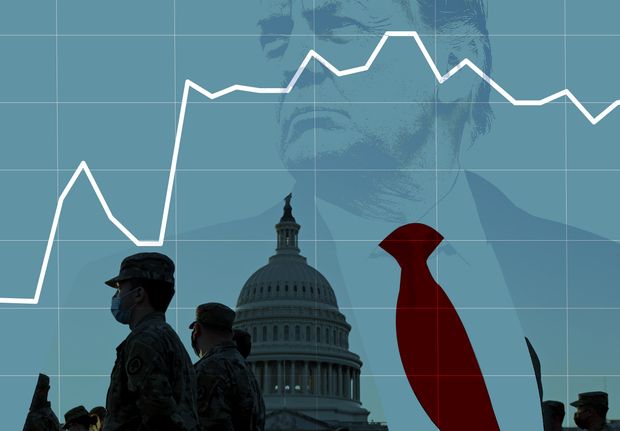 As an unprecedented second impeachment of President Donald Trump unfolded Wednesday in Congress, market participants were mostly unfazed but mindful of the historic moment in U.S. politics.

The House voted today to impeach President Trump for the second time in a swift and bipartisan condemnation of the President’s role in inciting last week’s riot at the US Capitol.

The riots led to the death of five people and raised questions in the U.S. and around the world about the integrity of U.S. democracy and a smooth transfer of presidential power.

House Democrats led by Nancy Pelosi, the speaker of the House, specifically charged that Trump “willfully made statements that, in context, encouraged—and foreseeable resulted in—lawless action at the Capitol, such as: ‘if you don’t fight like hell you’re not going to have a country anymore.’”

The  House voted 232 to 197 in its favor as the Democrats prevailed due to their majority in the lower chamber. In an extraordinary move, 10 Republicans broke rank with their party to approve the article of impeachment.

While impeachment won’t force Trump from office — Senate Majority Leader Mitch McConnell is not planning to bring the Senate back for a trial before Jan. 19, meaning the trial won’t begin until Trump is out of the office and Biden has been sworn in.

Though the Nasdaq closed in the green on Tuesday, losses from major tech players restricted its gain. Among the biggest gainers of the tech-laden index were Baidu, Inc. BIDU, DocuSign, Inc. DOCU, and Moderna, Inc.

Traders remained optimistic that Democrats will be providing additional fiscal stimulus to the pandemic struck economy and rates have been rising since Democrats secured majorities in both the House and Senate.

Last week, President-elect Joe Biden had promised a fresh stimulus, which will be “in the trillions of dollars.”