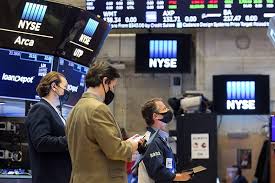 The Dow Jones Industrial Average dropped more than 550 points Thursday as a wave of selling that began in the technology sector took down swaths of the market.

Earlier, the Nasdaq dropped 3.5% for its worst session since October as tech stocks renewed their declines. The S&P 500 sank by 2.5% for its worst day in a month. And the Dow pulled back by more than 1.5% to retreat from its record high from earlier this week.

Stocks’ momentum has faltered the past week as investors have faced a sharp and swift rise in bond yields. The yield on the benchmark 10-year Treasury note marked its biggest one-day advance since November and settled at its highest level in a year.

Stock futures steadied on Thursday after a selloff during the regular trading day.

Contracts on the Dow, Nasdaq, and S&P 500 hugged the flat line.

Shares of Airbnb (ABNB) rose more than 1% in late trading after the company reported better-than-expected sales in the fourth quarter, despite ongoing pressure on the travel industry because of the pandemic.

Other gainers were stocks of Beyond Meat, which rose as much as 14.7% in volatile trading on news of deals with McDonald’s. Etsy shares popped 7.3% after the company’s latest quarterly figures easily beat analyst expectations.

Losers included Salesforce, software company’s stock slid 4.4%, Virgin Galactic pulled back by 11% with a  reported fourth-quarter loss, as did the electric vehicle maker Nikola, which slipped 1.9% even after the company posted a smaller-than-expected quarterly loss.

The yield on the benchmark 10-year note jumped to a fresh one-year high of as much as 1.6% on Thursday before cutting some gains.

Meanwhile, the world’s biggest Bitcoin fund is selling off faster than the cryptocurrency itself.

The $32 billion Grayscale Bitcoin Trust has plunged 20% this week, outpacing a 13% decline in the world’s largest cryptocurrency. GBTC’s once-massive premium to its underlying holdings has evaporated as a result, with the price of GBTC closing 0.7% below its underlying holdings on Wednesday — the first discount since March 2017.

The vanishing premium suggests that after billions poured into GBTC as investors sought exposure to Bitcoin’s dizzying rally, investors are looking for the exits as the climb stalls and the cryptocurrency frenzy is cooling down.