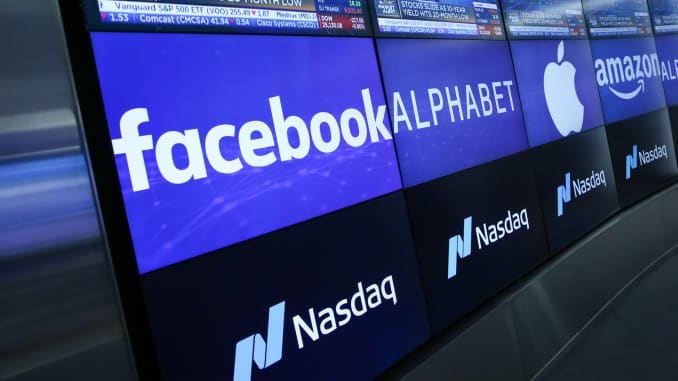 As investors continue to digest last week’s Reddit-fuelled volatility, they will also look this week to the regular cadence of quarterly earnings reports and economic data.

Another couple of Big Tech earnings will punctuate the flow of quarterly results, with Alphabet (GOOGL, GOOG) and Amazon (AMZN) each set to report after market close on Tuesday.

Analysts are looking for Alphabet to report accelerating revenue growth in its fiscal fourth-quarter versus the third quarter, as improving operating conditions for its advertising customers helped boost results at the end of the year. Consensus analysts are looking for sales, excluding traffic acquisition costs, to grow 18% to $44.16 billion, versus the 15% growth posted in the third quarter.

E-commerce giant Amazon is likely to report another blockbuster quarter amid the accelerating shift to online shopping during the pandemic. The company will likely post its first-ever quarter doing more than $100 billion in revenue, which would bring full-year 2020 revenue to a staggering $379 billion.

Amazon said its operating income in the fourth quarter would come in between $1.0 billion and $4.5 billion when factoring in costs of about $4.0 billion in costs related to COVID-19.

Meanwhile, Asian stocks climbed on Monday and U.S. equity futures pared declines as some of the concerns over volatile retail trading receded and signs of an easing cash crunch in China aided market sentiment.

On the coronavirus front, President Biden has agreed to meet a group of 10 Republican senators who have proposed spending about one-third of the $1.9 trillion aid relief fund, though congressional Democrats are poised to move ahead without Republican support.

Sunday’s invitation to the White House came hours after the lawmakers sent Biden a letter urging him to negotiate rather than try to ram through his relief package solely on Democratic votes.

The House and Senate are on track to vote as soon as this week on a budget resolution, which would lay the groundwork for passing an aid package under rules requiring only a simple majority vote in the closely divided Senate.

4 data stocks on NYSE to invest in 2021: An Investor Telegraph Exclusive