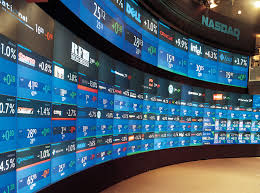 As the year 2020 dawns to an end, the overall outlook for stock markets is definitely bullish.

The pandemic may have upended the US economy in 2020, but equities withstood much of the damage as the major stock indexes reached new all-time highs in December.

Let’s look at the key thrust trajectories that were redefining moments for stock markets in 2020.

Perhaps they are indicators of what to expect in 2021.

By late February, the coronavirus had already devastated Wuhan, rippled throughout Asia, and was landing on the shores of Europe and the United States. After months of steady gains, stock markets finally crashed as skittish investors fled to treasuries, gold, and cash.

On February 27th, the damage was particularly severe: The Dow, S&P 500, and Nasdaq all fell over 4% on the day. For the latter two indexes, it was their largest one-day decline since 2011.

By mid-March the US was entering lockdown, equities were plummeting, and the economy was veering off a cliff. Federal Reserve Chair Jerome Powell in response unveiled an arsenal of unprecedented monetary measures.

Following an emergency half-point rate cut two weeks earlier, Powell on March 16th slashed rates to a target range of just 0% to 0.25%, commenced a new round of quantitative easing, and agreed to establish US dollar swap lines with other central banks.

Powell’s measures were critical for the economic recovery in the months to come, but at the time, not even the central bank chief could staunch the bleeding in stock markets.

After Powell’s announcement, US equities had their worst week since the 2008 crisis as the entire country went into lockdown.

It’s no coincidence that the stock market reached its nadir just a few days before Congress and President Trump signed into law the CARES Act, a $2 trillion stimulus package.

The spending program, unprecedented in size and scope, addressed nearly every weak point in the covid-hit economy: stimulus payments and enhanced unemployment benefits to spur consumer spending; forgivable loans and emergency grants for small businesses and large corporations; aid to the revenue-starved city and state governments; and so on, and so on.

The Fed’s rate cuts may have tempered investors’ fears, but it was the CARES Act that emboldened them to start buying stocks again.

Apple made history in August when it became the first US company to surpass $2 trillion in value, doubling its valuation in just two years. But the iconic technology company’s August milestone reflected more than one company’s success, it spoke to the growing market power of a few US technology companies and the pandemic’s role in cementing those firms’ dominance.

The pandemic also turbocharged a new generation of covid-proof stocks. Zoom (ZM), the video conferencing goliath, became a household name and saw its share price soar by over 450%. Pinterest (PINS) and Shopify (SHOP) excelled as entrepreneurs.

The  Dow Jones Industrial Average topped 30,000 on November 24th, with the news of  Pfizer (PFE) and Moderna (MRNA) announced successful trials of their coronavirus vaccines. The prospect of widespread vaccination – and a return to the pre-pandemic economy – spurred a rotation to value and cyclical stocks that struggled in 2020, such as airlines, cruise liners, hotels, energy firms, and financials.

Investor Telegraph wishes all its readers happy and prosperous times in the coming year.

5 safe stocks ‘strong to the core’ , but undervalued: An Investor Telegraph Exclusive