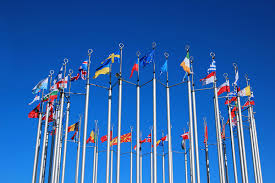 The European Union is seeking to forge a new alliance with the United States to bury the tensions of the Trump era and meet the challenges posed by China, the Financial Times reported on Sunday, citing a draft plan.

In July 2018, Trump stated in an interview that the European Union is one of the United States’ greatest foes globally, citing “what they do to us on trade”.

Relations between the United States and Europe have been strained under President Donald Trump but with  President-elect Joe Biden taking  charge in Jan, the mending process has already been initiated.

“As open democratic societies and market economies, the EU and the US agree on the strategic challenge presented by China’s growing international assertiveness, even if we do not always agree on the best way to address this,” the FT cited the draft plan as saying.

The plan, which will be submitted for endorsement by national leaders at a meeting on Dec. 10-11, proposed the launch of a new transatlantic agenda in an EU-U.S. summit in the first half of 2021, the newspaper added.

EU trade chief Valdis Dombrovskis earlier said the European Commission, which coordinates trade policy for the 27 EU member states, had made some informal contacts with the Biden team.

The draft paper, prepared by the Commission, says the EU-US partnership needs “maintenance and renewal” if the democratic world is to assert its interests against “authoritarian powers” and “closed economies [that] exploit the openness our own societies depend on”, according to the FT.

The paper says: “As open democratic societies and market economies, the EU and the US agree on the strategic challenge presented by China’s growing international assertiveness, even if we do not always agree on the best way to address this.”

It proposes the EU and US join forces to shape the digital regulatory environment, including by adopting common approaches to antitrust enforcement and data protection, cooperating on screening of sensitive foreign investments, and working together to fight threats to cybersecurity.

Other parts of the paper call for cooperation on the development and dissemination of COVID-19 vaccines and joint work to reform the World Health Organization.

Earlier in November, the EU imposed tariffs on up to $4 billion U.S. imports in retaliation for U.S. subsidies for Boeing BA.N but said it was hopeful of an improvement in trade ties under Biden.