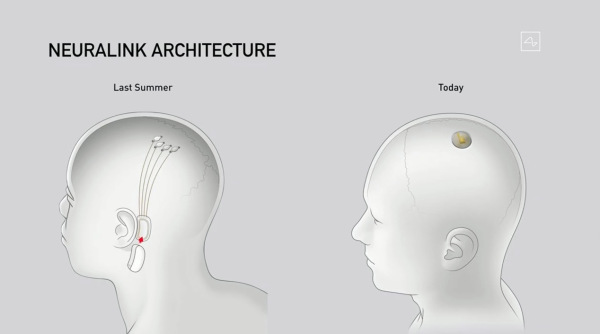 New technology is all set to launch by the company called Neuralink which has been supported by the CEO of Tesla, Elon Musk. Recently, the company announced an improved prototype of the brain implant which was launched a year ago by the same company. The prototype was launched in a live event on Friday.

The trial was undertaken on a pig. The pig has undergone some surgery and the device was implanted in its skull. The device is called The Link. The company also addressed that the device can broadcast the neural activity of the pig. Elon Musk further said that the device will be able to correct any shortcoming in the brain from memory loss [to] hearing loss, blindness, paralysis, depression, insomnia, extreme pain seizures, anxiety, addiction, strokes, brains damage. The first prototype had to be worn behind the ear but the new one can be planted inside the skull and is invisible. Only a tiny scare is visible from where the prototype has been implanted.

The Us Food And Drug Administration is also said to give the device a breakthrough designation in July. The reviewing and approval procedure for the device can be expected. In the live session, a surgical robot was also showed off by the company. The Robot is designed in collaboration with Woke Studio.

Synchron is a proper competitor of Neuralink. The company recently announced the designation for their device called Stentrode. The company recently also demonstrated that Stentrode had been implanted in a 75-year-old human patient with amyotrophic lateral sclerosis or popularly known as Lou Gehrig’s disease. The patient uses his thoughts to operate electronic devices. It also doesn’t require to drill a hole in the skulls of the patient, like Neuralink.

Elon Musk also said that his company wants to deliver a device which can be used for gaming and communication purposes. They also want to build a device through which the people will be able to ride Tesla by just thought alone.

Moderna To Give 40 Million Doses Of Coronavirus Vaccines To Japan

TikTok Plans To Shut Down Its Business Rather than Selling it