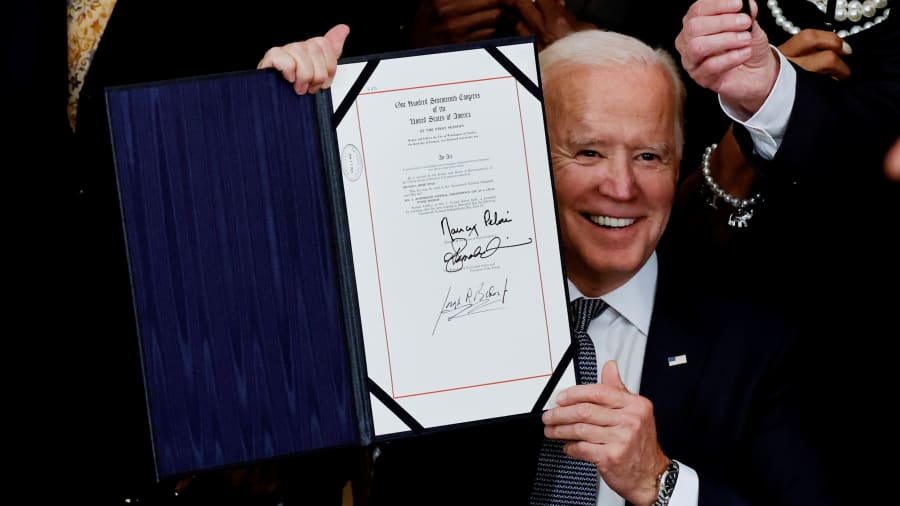 President Joe Biden signed a law-making Juneteenth a national holiday on Thursday, as companies such as Allstate, Google, and Nike have announced over the past year that they will recognize Juneteenth as a paid holiday for their employees.

At a jubilant White House ceremony, the president emphasized the need for the US to reckon with its history, even when that history is shameful. “Great nations don’t ignore their most painful moments,” Biden said.

Just before signing the bill, Biden added: “I’ve only been president for several months, but I think this will go down for me as one of the greatest honors I will have had as president.”

Kamala Harris, also in attendance, reflected on the historic nature of the day and the presence of Black lawmakers who worked diligently to advance the bill.

Juneteenth celebrates the end of slavery, and centers on the arrival of Union troops to Texas on June 19, 1865, with news of emancipation – although the Emancipation Proclamation had been issued 2 ½ years earlier. But Juneteenth did not mean immediate freedom for everyone. Enslaved people in Native American territories had to wait another year for freedom. And despite the legal end of slavery, white Southerners swiftly enacted racist laws, called “Black Codes,” that restricted Black people’s freedom for decades to come.

Black activists have advocated for this outcome for years, but the visibility and resonance of Juneteenth acquired a new sense of urgency last year following the death of George Floyd in Minneapolis.

June 19 falls on a Saturday this year, so many companies elected to recognize it on Friday, the 18th.

Due to the holiday being added to the federal calendar so close to the date, the stock market remained open on Friday, but the number of companies acknowledging Juneteenth is growing as corporate America seeks ways to deliver on diversity and inclusion pledges — although some question whether they’re truly fulfilling the spirit of expanding diversity and combating racism.

Starbucks, the world’s most popular coffee chain made Juneteenth a holiday in 2020 and pays hourly employees time-and-a-half. Salaried partners who are required to work will receive a holiday as compensation, and support partners will get the day off with regular pay.

“This was one of the many actions we’ve taken to promote an environment where our partners see and feel real progress,” Dennis Brockman, global chief inclusion and diversity officer at Starbucks, commented.

Target, the global retail giant followed the same as Starbucks last year and so did Best Buy.

Before 19 June became a federal holiday, it was observed in the vast majority of states and the District of Columbia. Texas was first to make Juneteenth a holiday, in 1980.